Britain’s love for the NHS must not blind us from the systematic faults during this crisis. From the difficulty in sourcing and delivering personal protective equipment, to the ill-fated discharge of Covid-positive patients to care homes — something is not right with our supposedly perfect system.

Even during normal times, the NHS can struggle. A perpetual complaint is the many days, if not weeks, it can take to get a GP appointment. Many of us who use it, many who work in it, find it totally dysfunctional. But it doesn’t have to be this way.

Those clapping every Thursday night in support of the NHS should speak to foreign visitors.

During this crisis we have heard much about Germany. They have a decentralised, insurance based system. While this may be a better model for the UK in the long-run, as long as there is healthcare for those who cannot afford insurance, it will be difficult to jump to this system in a single leap.

Another alternative is Australia’s world leading mixed public-private system. Australians who visit and live in the United Kingdom cannot understand why they cannot simply book an appointment at any GP practice at any time. At home in Australia they can opt for a fully state funded appointment (“bulk billing”), or pay a small fee to see a private GP which is subsidised by a state supported co-payment. This means practically anyone can access quality healthcare in a timely manner.

In this country, people with a range of incomes have to pay for their housing, food, gas, electricity and clothing. All of these are basic human needs, provided at various qualities. For those struggling, we give them cash payments but do not direct how they spend the money. But somehow we have become obsessed with the false promise of healthcare that is perfectly fair and evenly distributed irrespective of the ability to pay.

The priority should be ensuring that everyone has access to a minimum standard of healthcare — not that everyone has access to the same, but lower, level of care. Our goal should be to lift the quality of healthcare for everyone, not to bring those at the top down. This can be achieved with a co-payment system, in the Australian mould, that provides broad swathes of people access to high quality, private healthcare. This would both take pressure off the public system and provide much greater patient choice. This means everyone ends up with a higher standard of care.

Opponents to such a system would scream about the creation of a “two tier system”. But, in reality, we already have a two tier system. A relatively small number can currently opt for healthcare from private GPs and hospitals in the United Kingdom. Because the current two tier system is not encouraged, and indeed it has been positively discouraged by various government policies, those in power can claim plausible deniability that they have allowed the two tiers.

I have worked in private general practice for over 25 years in central London. If the NHS provided adequate care no one would need to use our services. Many of our patients are not someone wealthy or famous, but a young working person on an average London salary who does not have the time to see a GP near to where they live. They pay our fees because they want to get back to work quickly.

Many of these patients have never bothered to register with an NHS GP. If NHS GPs were allowed to see their own patients privately (banned since 1948), this could allow a co-payment system which would enable many patients to pay a top up fee to access faster medical care, likely using a remote consultation such as email, telephone or video. NHS dentists and hospital consultants have no such restrictions.

General practice is changing. Younger doctors are not opting for full-time work, but are working part-time in the NHS and privately for providers such as Samedaydoctor or video apps such as Babylon. Since these doctors have made the choice to work this way, it would make sense to not have an artificial separation.

During the pandemic the private sector made their hospital beds available to the NHS. In practice, like the Nightingale hospitals, these beds were not needed. It is time now to build on this form of collaboration and finally to remove the stigma of “privatisation,” whereby the NHS contracts to private providers.

During the last election campaign the term privatisation was regularly used as a scare tactic to imply that at some point people will be forced to pay for medical care. We have many people in this country who cannot afford to pay anything for additional medical care. The basic ethos of the NHS, universally free at the point of use, should not change. But we do need to have a broader debate about the involvement of the private sector in the provision of high quality healthcare.

“I went online to book my test one evening after a simple Google search of ‘Covid-19 antibody check’. Early the next morning I got a phone call from a pleasant-sounding woman at the clinic I had chosen. She checked my name and address, gave me a 1pm slot that day and took my £190 payment.”

“Three-and-a-half hours later, I received an email from the clinic saying I was in the clear.

And that means, almost certainly, that Nigel did not have the virus, either, when he ended up in hospital the first time.

I am sure I am not the only one rushing to have the test.

Even if you test positive, it does not guarantee immunity from the disease. The makers of the Government tests — Abbott Laboratories in the U.S. and Swiss pharmaceutical giant Roche — make that clear.

But these tests give us a glimmer of hope. They will help scientists get a ‘bigger picture’ of Covid-19’s lethal antics”

GP at Same Day Doctor Laurence Gerlis joins Julia at 9.15am to answer your medical and coronavirus questions. What would you like to ask the doctor? Call 0344 499 1000 or tweet your questions below ▼ 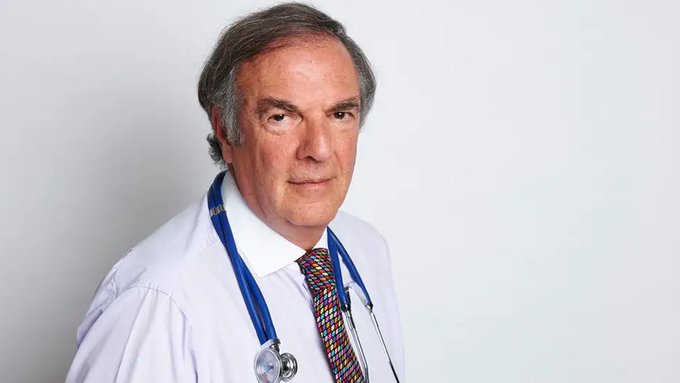 We have had discussions about this exciting new medication.  A twice-a-year injection that reduces bad cholesterol to protect the heart is to be pioneered by the NHS in England. Already, millions of people take daily statin pills to cut their cholesterol. But later this year, a “ground-breaking” large-scale clinical trial will offer NHS patients a new form of medicine, gene silencing, in an injection called inclisiran.

Health Secretary Matt Hancock said the initiative could save 30,000 lives during the next decade.  By “silencing” the PCSK9 gene, inclisiran can make the liver absorb more “bad” cholesterol from the blood and break it down.

Trials presented at the European Society of Cardiology last year showed it could cut bad cholesterol levels in half within weeks. Prof Kausik Ray, who led those trials, from Imperial College London, says this gives it “enormous” potential. And the Department of Health and Social Care says it would prevent 55,000 heart attacks and strokes each year for every 300,000 patients treated. NHS patients who have not had a heart attack or stroke but are at high risk of having one will be invited to take part in the latest trial. About 40,000 people might be eligible.

Inclisiran will also be assessed for more routine use next year based on evidence from previous trials. At the moment – because of the way decisions on health are devolved within the UK – the announcement applies only in England.

An international team, including researchers from Google Health and Imperial College London, designed and trained a computer model on X-ray images from nearly 29,000 women. AI was still as good as two doctors working together.  Unlike humans, AI is tireless. Experts say it could improve detection.

END_OF_DOCUMENT_TOKEN_TO_BE_REPLACED

Newly-diagnosed cancer patients are to be offered NHS gym sessions before they start chemotherapy, in the hope of boosting the speed of their recovery. Thousands will be invited to sign up for a “prehab” fitness programme within 48 hours of being diagnosed. The aim is to make patients “match fit” ahead of chemotherapy or major surgery.

END_OF_DOCUMENT_TOKEN_TO_BE_REPLACED

Samoa’s main streets are eerily quiet as the government stepped up efforts to curb a measles epidemic that has killed 62 people. The government told most public and private workers to stay home for two days and shut down roads to nonessential vehicles as teams began going door-to-door to administer vaccines. Families in the Pacific island nation were asked to hang red flags from their houses if they needed to be vaccinated.

END_OF_DOCUMENT_TOKEN_TO_BE_REPLACED

SameDayDoctor was interviewed by BBC Television regarding the advice to the NHS that swimming is excellent exercise.  Furthermore, we conducted a radio interview about a new smear test methodology being trialled.

END_OF_DOCUMENT_TOKEN_TO_BE_REPLACED

A life-extending drug for cystic fibrosis will be available on the NHS in England, health bosses say. NHS England reached a deal with Orkambi manufacturers Vertex Pharmaceuticals after months of talks. Patients should be able to get the drug within 30 days. The drug improves lung function and reduces breathing difficulties and can be given to children as young as two.

END_OF_DOCUMENT_TOKEN_TO_BE_REPLACED

The world could be free of malaria – one of the oldest and deadliest diseases to affect humanity – within a generation, a major report says. Each year there are still more than 200 million cases of the disease, which mostly kills young children.